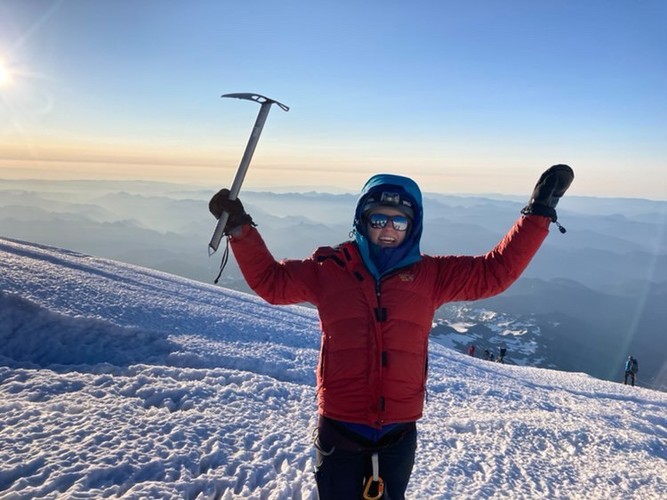 Once-in-a-lifetime climb with 7 rad ladies from SheJumps and 4 amazing lady guides from RMI. 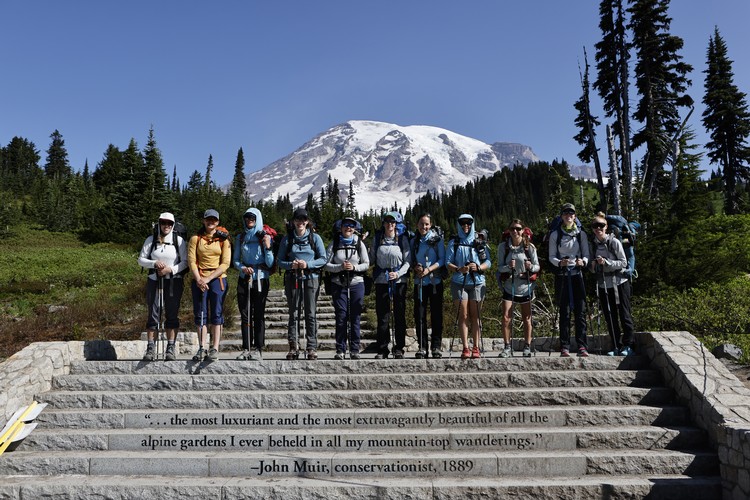 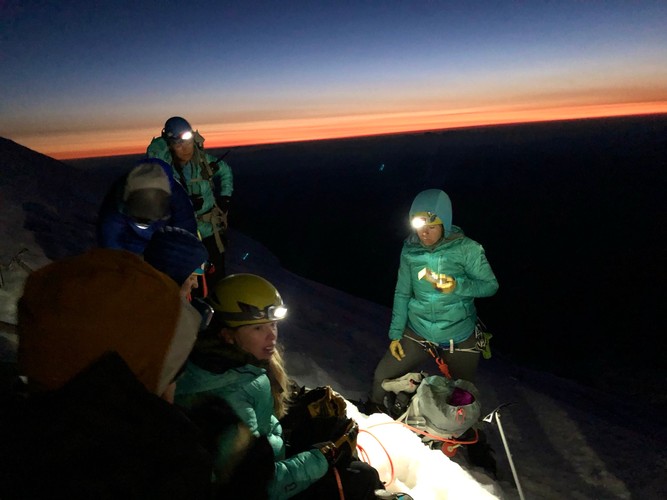 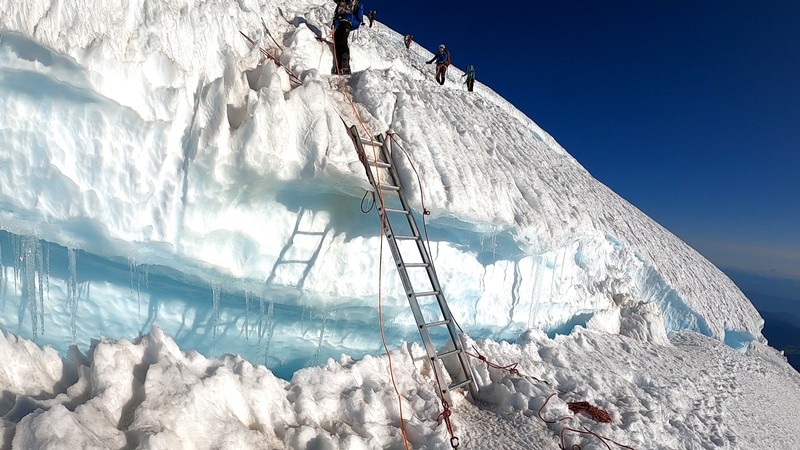 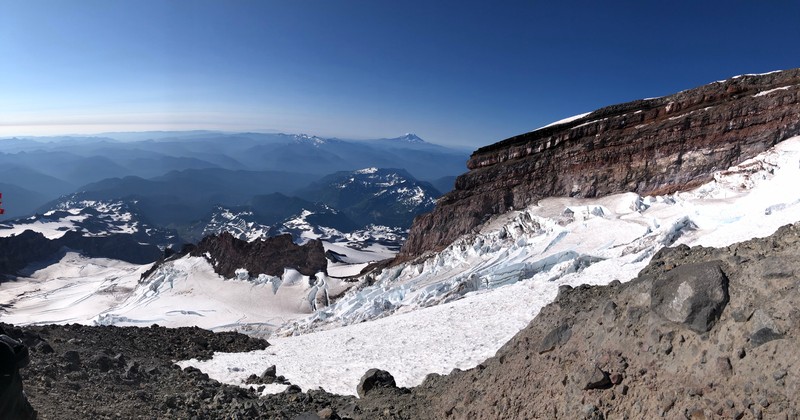 I've always dreamed about climbing Mt. Rainier. I spent the last 3 years looking at its peak from the top of other cascade volcanoes, and it was becoming more and more tempting. An organization I've been getting more involved in called SheJumps offers fundraising climbs each year on Mt. Rainier, and on a whim, I decided to reach out about this year's climb. There weren't technically any openings left, as most of these people had been signed up since the beginning of the year, but I figured why not ask? Oddly enough, someone who'd signed up to climb had sustained an ankle injury and wasn't sure if she'd be able to climb. I was told to sit tight for a few weeks until they knew more, and that they would offer me a spot if she dropped out.


I spent the late part of June anxiously waiting to hear and tentatively training for what would be the biggest physcial undertaking of my life. Mind you, that the climb was July 9-12, and I was only a couple of weeks away from possibly going up Ranier. I got the call two weeks before the climb that I was IN! I spent the next two weeks in a state of complete excited-panic-holy-sh*t mode, trying to make sure I was ready to go. I spent the weekend prior to the climb trekking up to Camp Muir with a full pack, trying to get a feel for what was ahead.


The next weekend, I arrived in Ashford to meet the team from SheJumps and our guides from RMI. We were an all women's team of 7 climbers and 4 guides. I was so inspired to be around so many other female climbers. I'm usually the only woman in a group of male climbers. We immediately built an amazing sense of camraderie and trust in one another, like we had known each other for years. I guess that's what happens when you get like-minded people together.


We spent the following day on the Muir snowfield learning cramponing techniques, self-arrest, and rope travel with our incredible guides. Once snow school was over, the heaviness of the task ahead set in. I couldn't have been more nervous. I carefully loaded my pack with climbing gear and copious amounts of Picky Bars that evening and tried to get a wink of sleep.


The next day, we loaded packs on our backs and made the 4,500 ft, 5-mile trek up to Camp Muir from Paradise. The sun beat down and reflected back off the snow, making an already warm day feel even more intense. I did my best to move slow and intentionally up the snowfield. I was trying to follow the advice of a family friend who had climbed Rainier a handful of times - "be the turtle."


When we hit Camp Muir in the late afternoon, we threw our packs down in the bunkhouse and took a well-deserved rest. Sitting at 10,000 ft, I started to feel the effects of hypoxia. Sitting through our team summit preparation meeting with the guides, I started to feel naseous - whether it was from the nerves or the thin air, I can't be sure. A warm cup of ramen noodles and broth brought me back to, taking in the salt and replenishing all of the liquid I'd likely lost earlier in the day. Our summit meeting outlined the route, gear list, and logistics for the following day. We were to "sleep" that evening from 6pm to 11pm, when we'd be awoken by the guides to prepare for our summit attempt. I laid in my bunk wide awake until about 10pm when I fell asleep briefly. As soon as the guide walked in and turned on the light, I knew it was game time.


I started the morning with my Picky Bars How Bout Dem Apples oatmeal, the breakfast of absolute CHAMPIONS! I scrambled around the bunkhouse packing my gear, lacing up my mountaineering boots, and trying to turn nerves into excitement. When I stepped out of the bunkhouse, the sky was lit up with the most stars I've ever seen. The milkway was on full display for us. I put my crampons, roped up to my teammates and guides, and we began our ascent.


We set across the Cowlitz Glacier towards Cathedral Gap at midnight. The boot pack wound its way mildly up and across the glacier. As we reached Cathedral Gap, the trail became rocky and awkward for cramponed feet. I looked down at the rope in front of me hanging in a loose curve between my teammate and I as I walked, monitoring the distance kept between us. We stopped at Ingraham Flats for our first break of the summit push. I pulled my oversized parka out of my pack and threw it around me, rummaging through the pockets for my pre-stocked snacks and Picky Bars. Our guides were monitoring us closely, encouraging us to eat whatever we could, drink water, and checking in on our remaining stores of energy. I turned around just in time to avoid witnessing one of my teammates on another rope group puke into the snow. We were sitting at 11,000 ft and the elevation was starting to take its toll on all of us.


Ten minutes later, we were back on the move heading towards the dreaded Disappointment Cleaver. The name certainly did it justice. The cleaver is a long, rocky section of the climb with significant elevation gain. We wound through a primitive trail alternating between small, loose rocks and large boulder that needed to be climbed on your hands and knees. The hour plus climb up the cleaver was a monumental effort at every turn, with the danger of rockfall from climbers above looming large. Each time I looked up above me, I saw more headlamps climbing higher and higher up the cleaver. It was soul-crushing to look up and know that the suffering wasn't nearly complete. When we finally reached the top of the Disappointment Cleaver, my legs were taxed and the thin air stole oxygen from my hungry lungs. We sat down at 12,000 ft for another much-needed fuel up on snacks and water. Although I was absolutely exhausted, I told my guide that I had the summit in me.


We pressed on towards High Break, our next resting place at 13,500 ft. Our team wound our way up the glacier, crossing small crevasses in endless switchbacks. At about 13,000 ft, we encountered a ladder that needed to be climbed in order to cross a wide crevasse. One at a time, we climbed the ladder, fearing to look down into the abyss below. In that moment I was incredibly happy it was still dark outside. The crampons were awkward on the ladder rungs, and I took great care to move slowly and surely up.


At 13,500 ft. we rested and took in our last sustenance before our summit push to 14,410 ft. My legs were heavy, my body was exhausted, and my mind was fighting to stay in it. I knew I would never give up if I had made it this far. I pushed on and told myself to hang in there just a bit longer. We continued to climb up a steep face as the sun began to rise and turn the sky shades of pink and orange. The beauty of that sunrise took my breath away and brought me back down to earth and why I was here. I put one foot in front of the other and tried to focus my attention on the rope in front of me, which at times began to pull on my harness as my legs tired. I was struggling to maintain the pace of the team at this point.


As soon as I saw the rock rim of the crater looming above me, I kew it would just take one more push before I'd achieved what I'd set out to do. We rounded over the crest of the summit into the crater, where suddenly, there was nothing left to climb. We were there! My teammate and I were cheering and hugging and absolutely ecstatic. I threw my pack down, digging for another Picky Bar and some much needed water, when I began to feel cold. I pulled my parka out and wrapped it around myself. I sat down on my pack and my knees began to shake uncontrollably. My guide noticed my legs bouncing uncontrollably and lept into action, grabbing any remaining layers in my pack and shoving my hands into gloves. In my pre-hyperthermic state, I couldn't think straight and I was scared. I had sweat through my clothes on the climb up, and now the cold was ripping through me. My guide grabbed her own parka and put it on me to keep me warm. My adrenaline was absolutely spiked and I couldn't help but feel completely overwhelmed. With some candy and electrolytes, I was finally able to regulate my body temperature and enjoy the experience of standing on the summit I'd always dreamed of being on. We took our photos, and headed back the way we came.


The long trek down the mountain was tedious and exhausting. The Disappointment Cleaver felt almost just as draining to go down as it was to go up. Our bodies were filled with aches and pains as we descended into more oxygen-rich air. We stopped at Camp Muir for an hour to load our packs with any gear left behind in the bunkhouse and rest briefly. From there, it was a straight shot down the Muir snowfield and back to Paradise. The glissade chutes were my saving grace on the descent, utilizing every opportunity to get off of my feet. The sight of the Paradise parking lot was welcome to my sore, tired body. Our long journey was finally over. All of our rad lady climbers had stood on the summit and made it down to celebrate or success.